It was a cold and bleak June morning when we arrived at Phillippa and Stuart’s house. Phillippa greeted us at the door with a warm smile and ushered us in, “Would you like a coffee? Stuart is a keen barista” – we instantly felt at home. 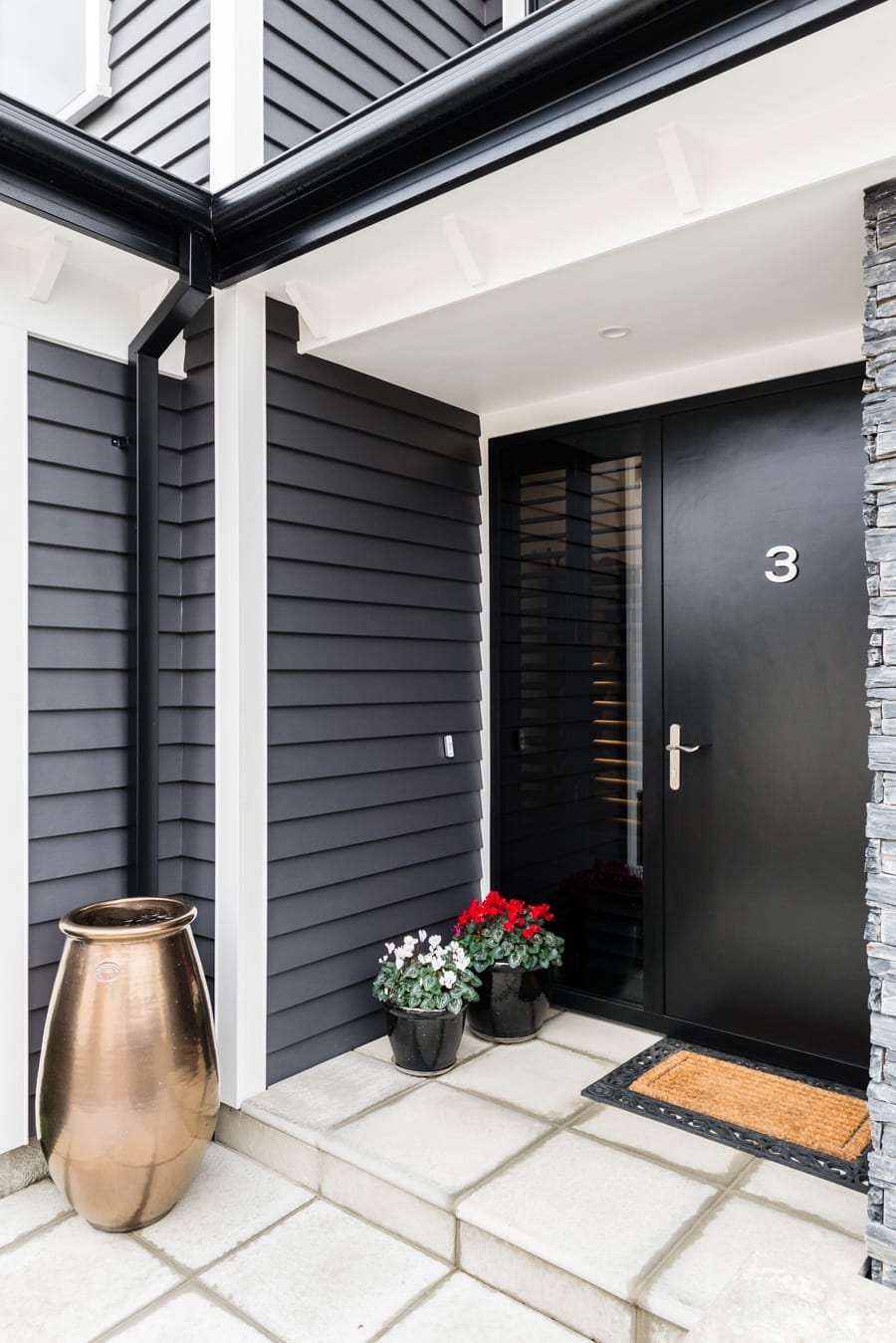 Like so many Cantabrians, Phillippa and Stuart were faced with a rebuild after the Christchurch earthquakes severely damaged their 1920’s Villa. While on the hunt for a section, Stuart rang Mike Greer Homes who showed them the initial plans for a house currently in development. The foot print was set in stone, which left the interior layout and style very much up to them. Not wanting to go with the status quo, this suited the couple perfectly. 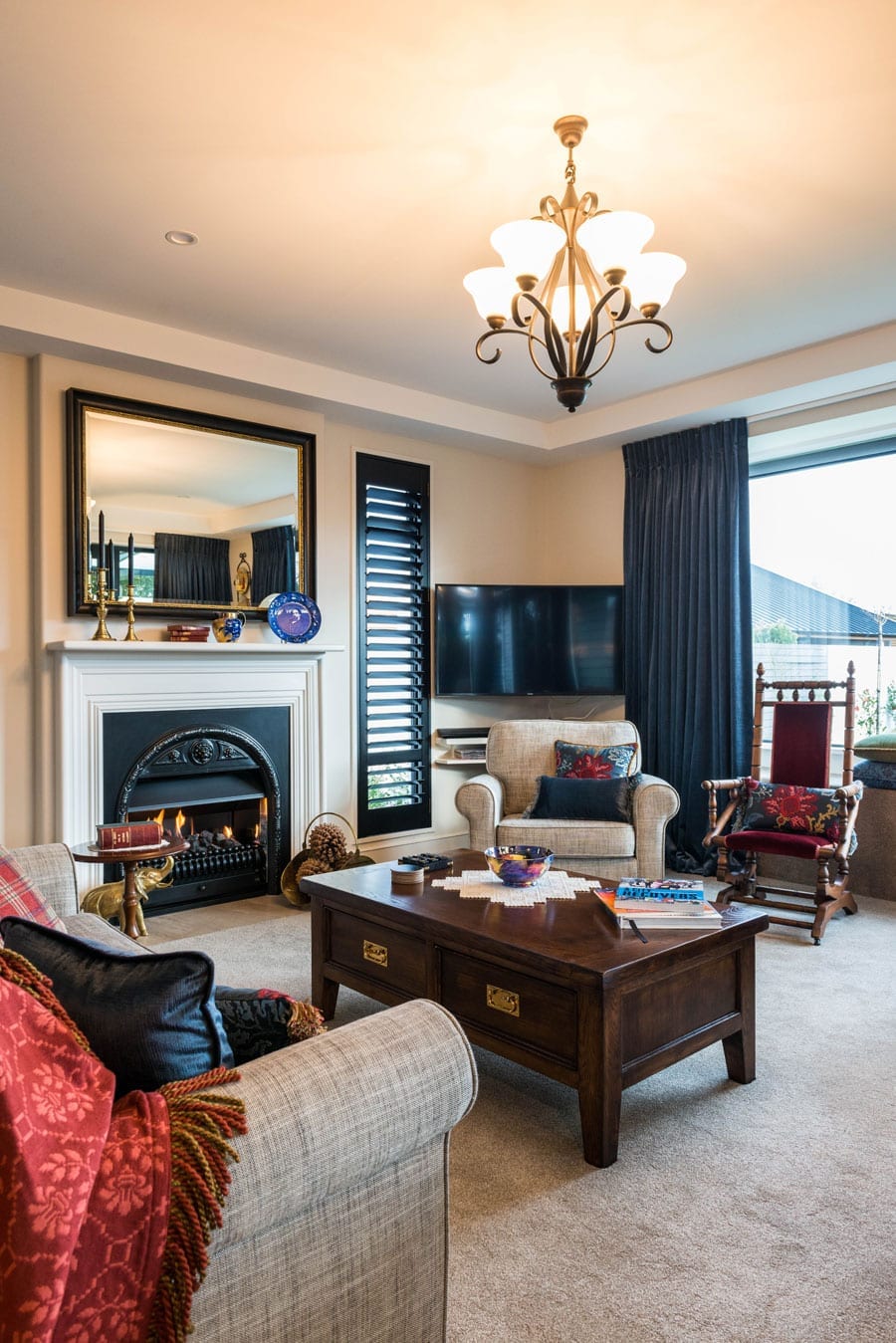 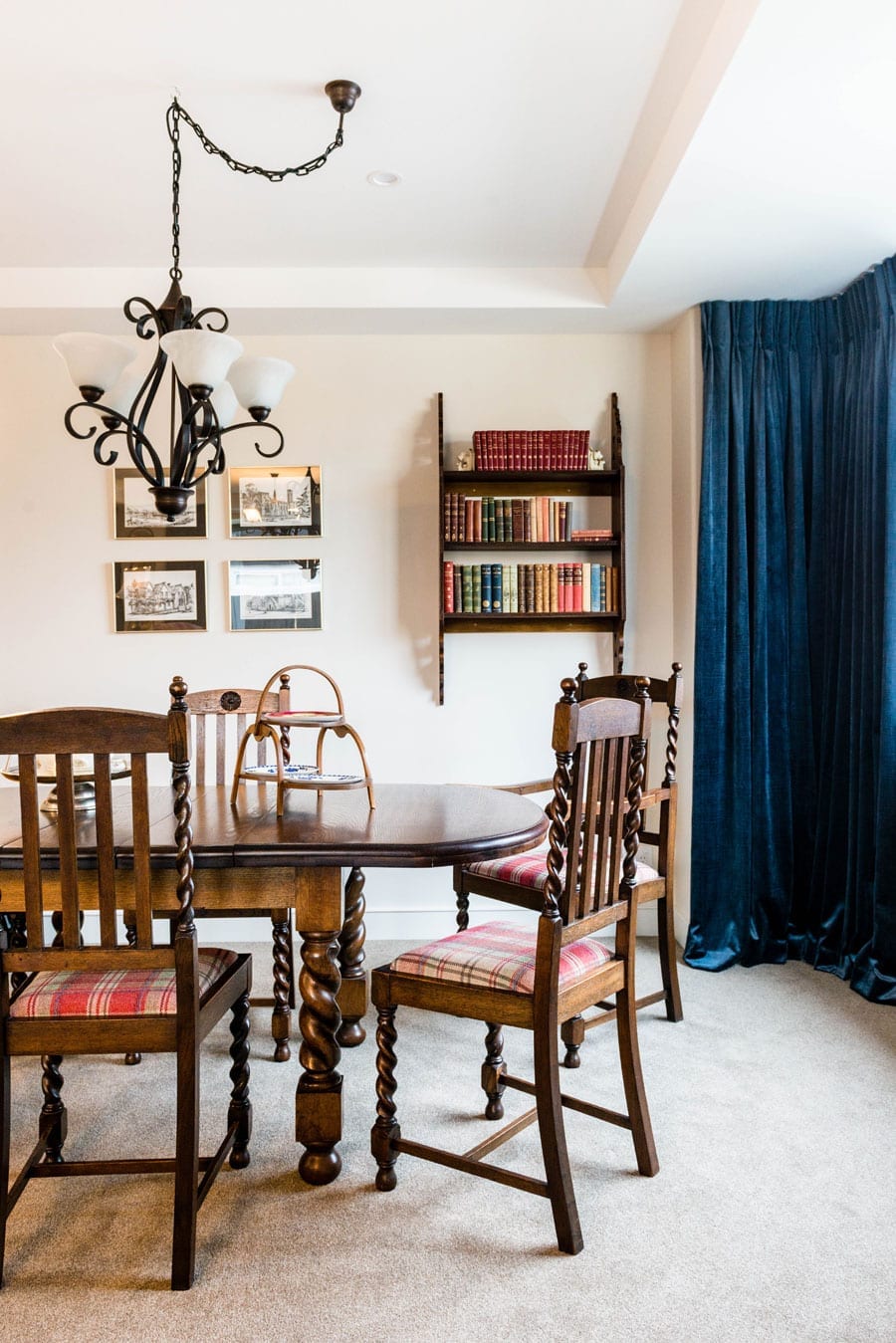 They engaged McKenzie & Willis interior designer, Andrea early on. Andrea was tasked with making Phillippa’s vision a reality and together they spent many hours scheming up ideas for the home. Phillippa tells us that the process was very collaborative and Andrea was brave enough to say what would work and what wouldn’t. With a laugh she explains that “Andrea was very good at reading me”.

On her visits, Phillippa would bring in items she wanted to incorporate into the interior design scheme – china, embroidery and sentimental treasures from her previous home. These items provided inspiration for the scheme and informed nearly every decision, from wallpaper to curtains and everything in between. 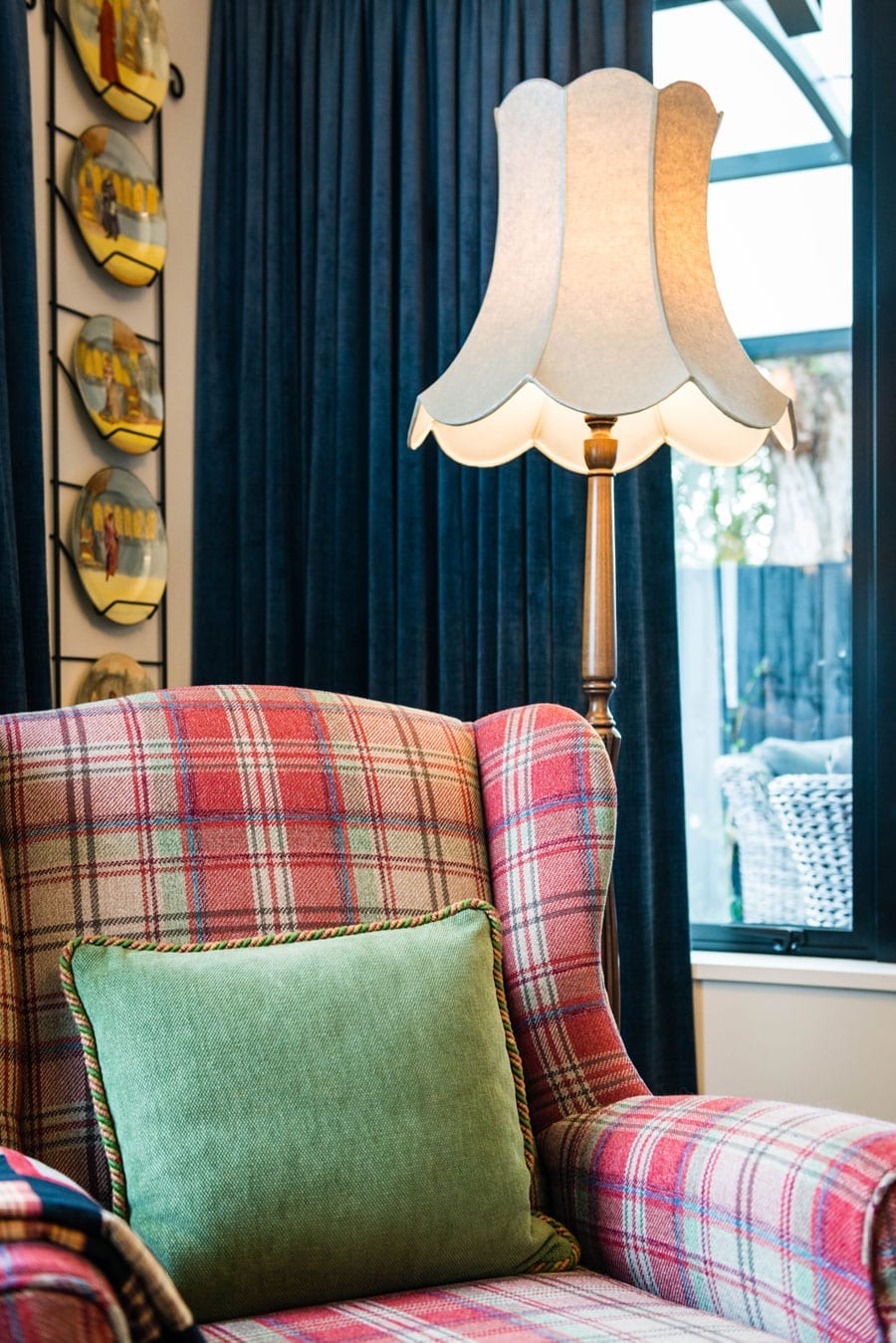 Luxurious velvet curtains in deep midnight blue anchor the living room and provide a backdrop to the eclectic mix of homewares and furniture. Andrea and Phillippa describe the look as “timeless” adding that they really loved the richness of jewel tones and sought to incorporate these colours where they could. 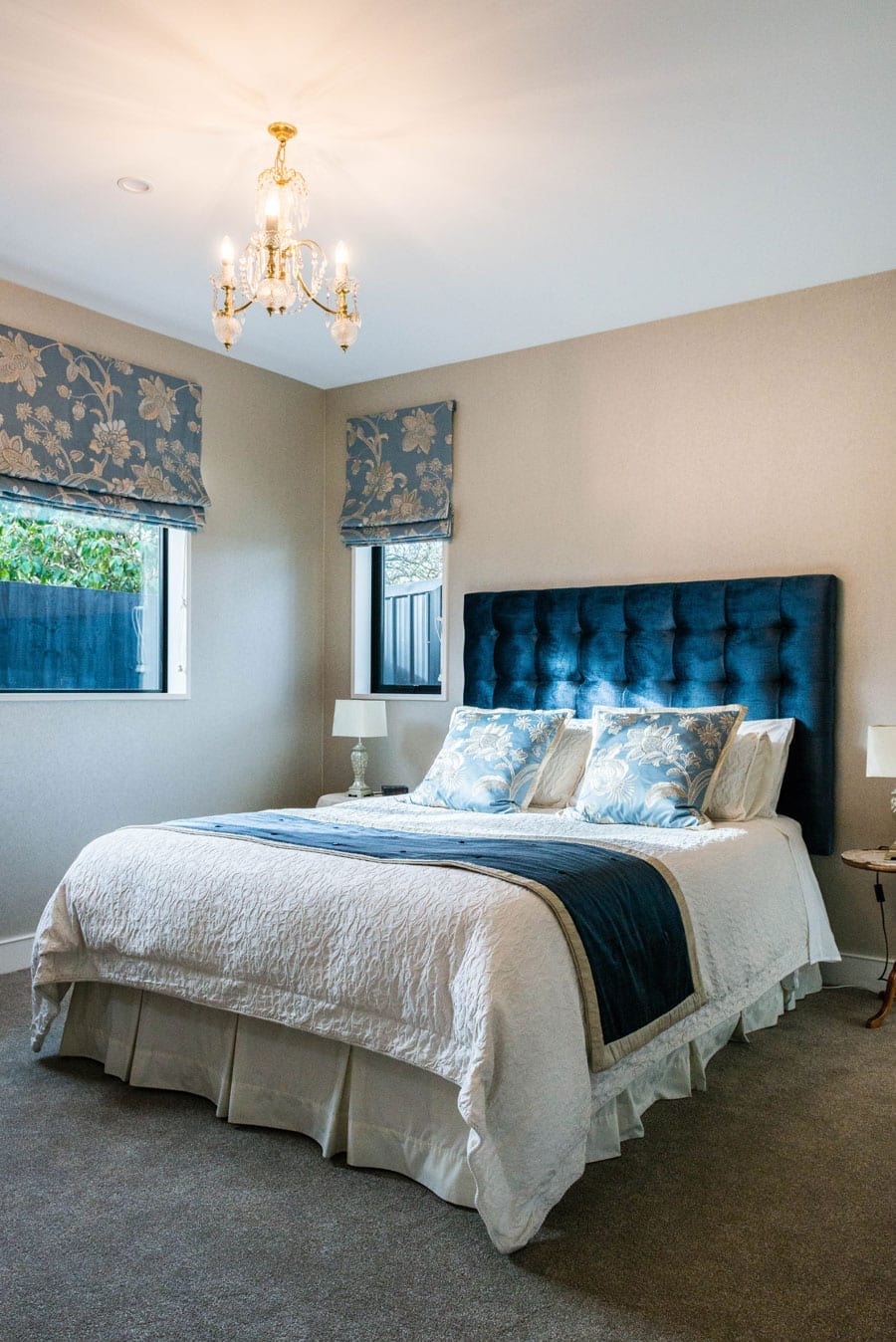 The Harlequin velvet was such a hit that they decided to use it again in the guest bedroom – this time they used left over pieces of fabric to create a bespoke headboard. Andrea tells us that this was somewhat of a mission; the pieces of fabric were so small that the headboard had to be meticulously planned out, “We got there after a lot of hard work and we’re delighted with the result. It was also such a bonus to use up leftover curtain material that would otherwise have gone to waste”, says Andrea. 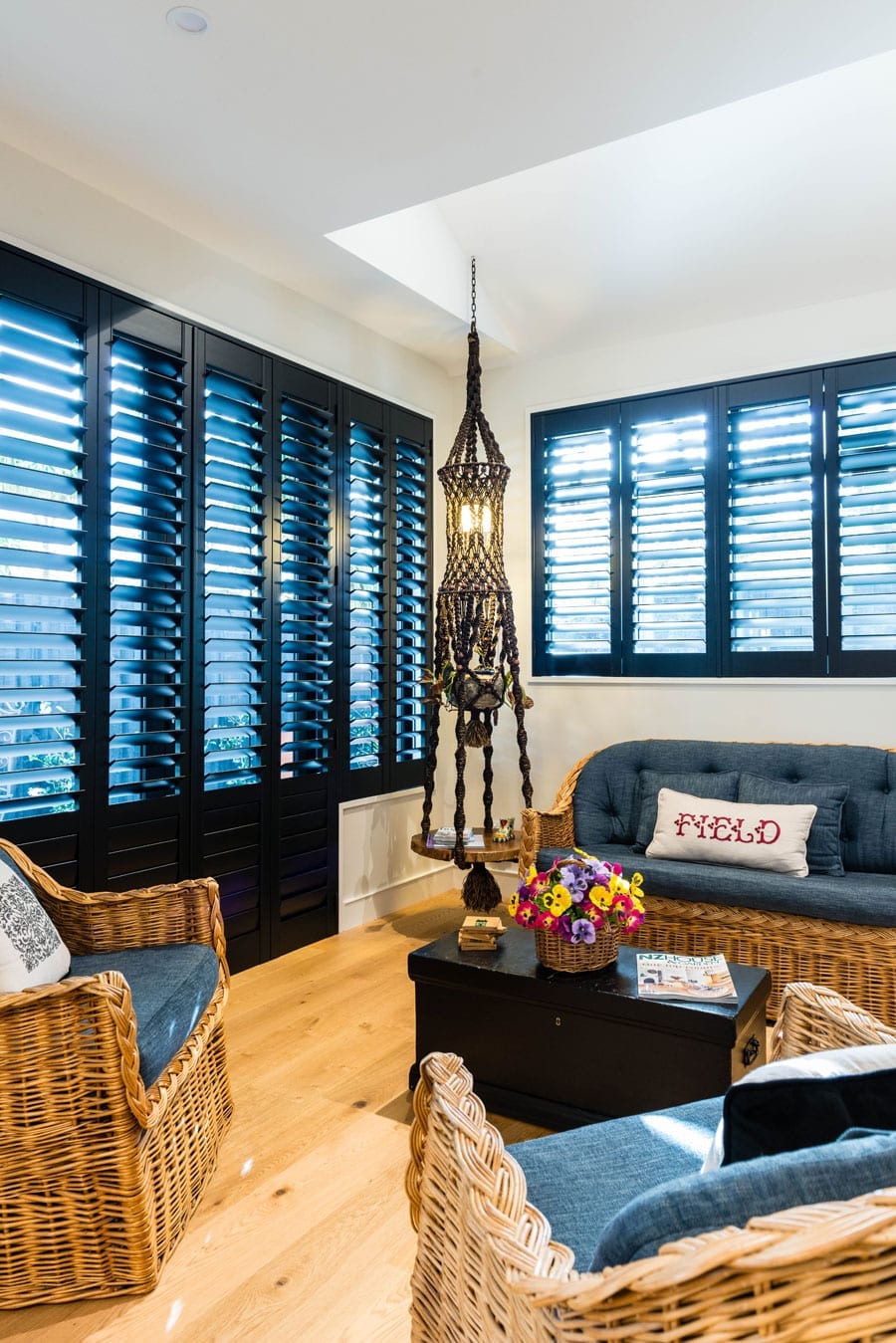 As for the shutters, Stuart admits he took a bit of convincing, “Initially we worried that the black joinery would overpower the room, but now I can’t imagine having it any other way”. Indeed, the shutters really do add something to the interior that curtains alone wouldn’t. The black modernises the interior and brings a contemporary edge to the whole look. 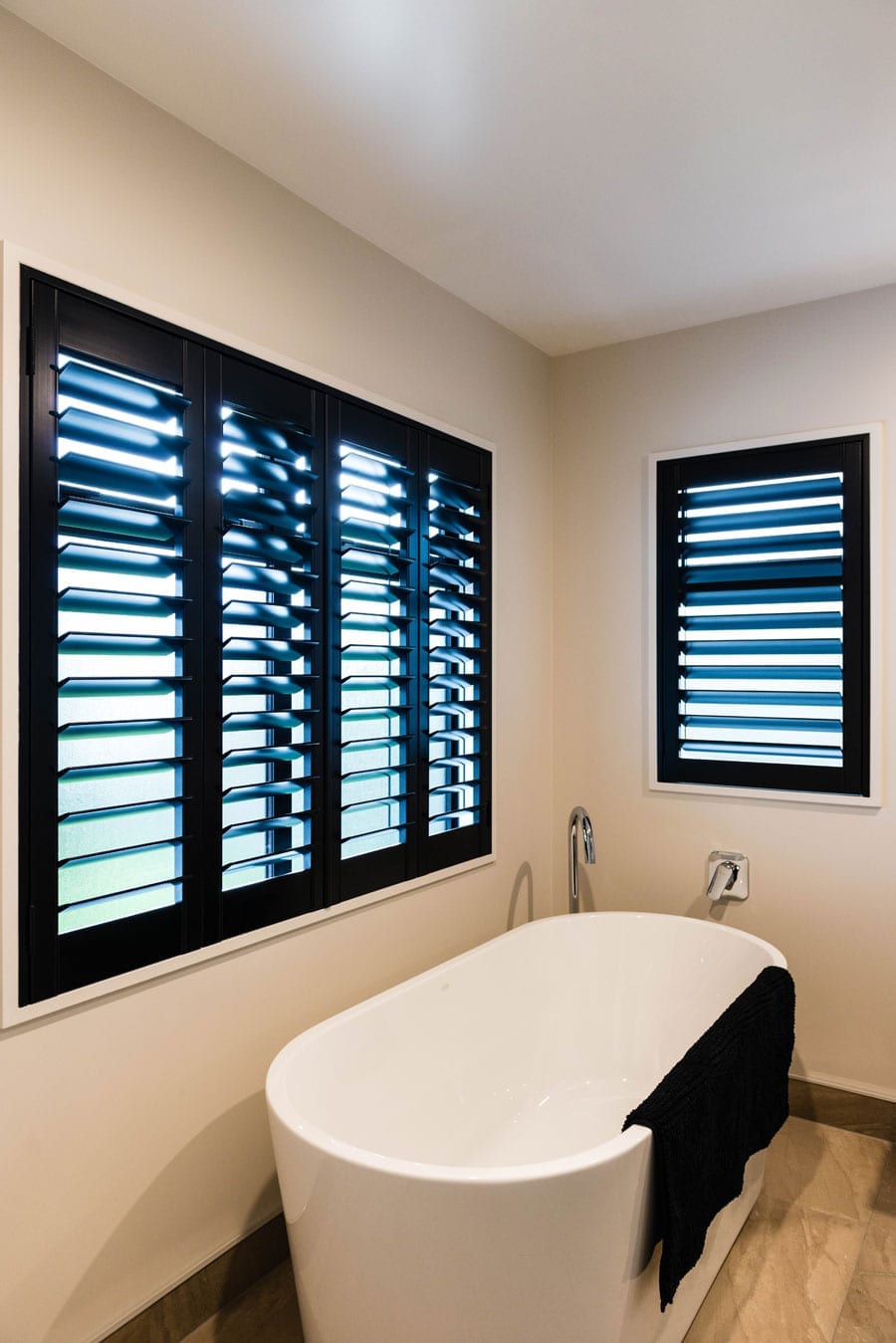 Walking around the house you can’t help but notice the abundance of beautifully made custom cushions. Andrea’s designer eye can be seen in the combination of luxe fabrics, fringe detailing, and embroidery. Andrea adds it was very much a team effort though, “One of the great things about working at McKenzie and Willis is being part of a design team. We’re always bouncing ideas off each other and I really appreciate the support. The technical knowledge and experience within the team is invaluable.” 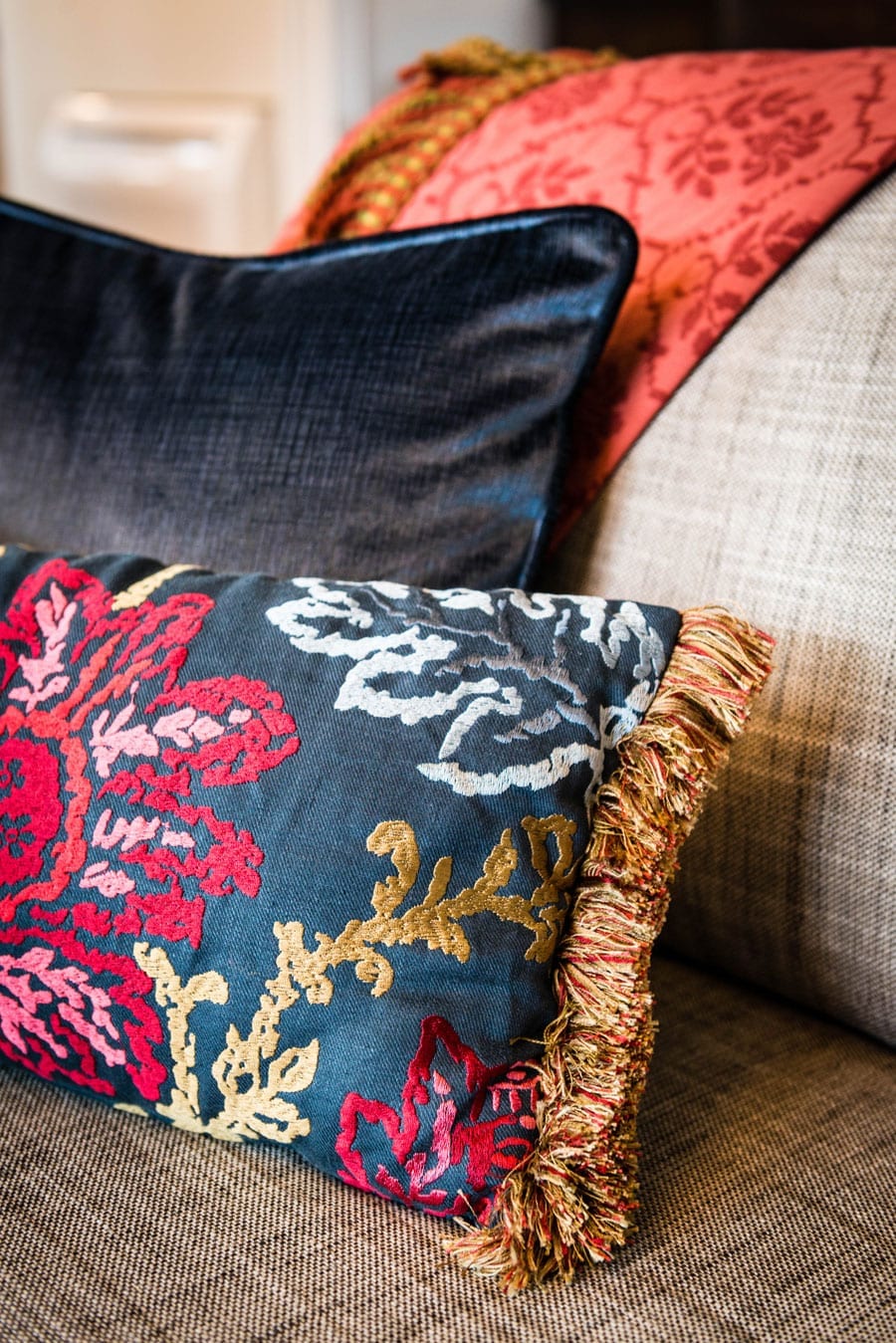 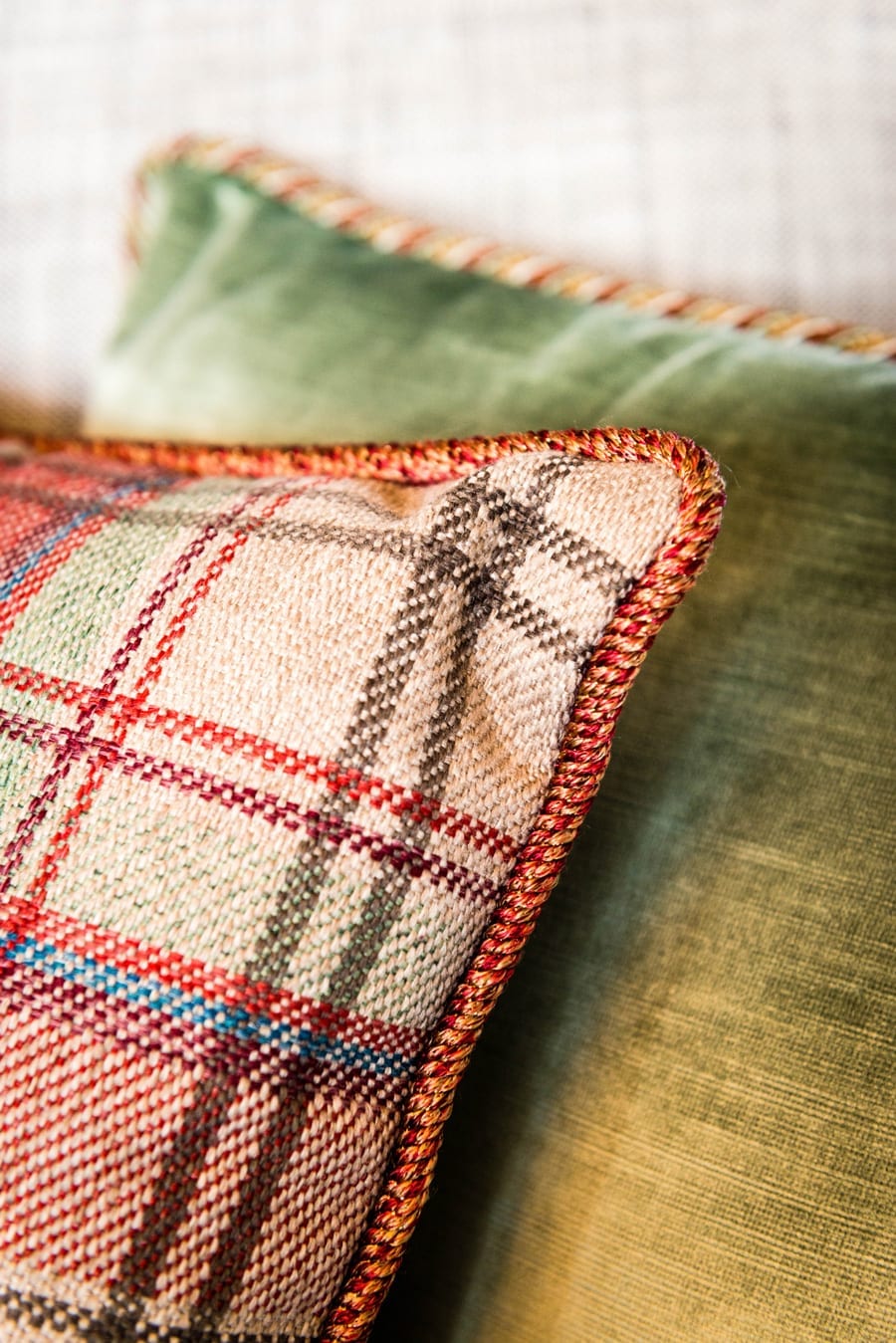 Upstairs, the beauty is in the details. The most gorgeous floral wallpaper from Designers Guild is complimented by a MM linen quilted cotton bedspread. The touch of tartan in the bolster cushion adds interest and ties the scheme back to the rest of the interior.

These details are what makes this interior so special and Phillippa cautions future home builders to make sure they allow enough in the building budget for window treatments, “Too often you see beautiful homes let down by the finishing touches”, says Phillippa. 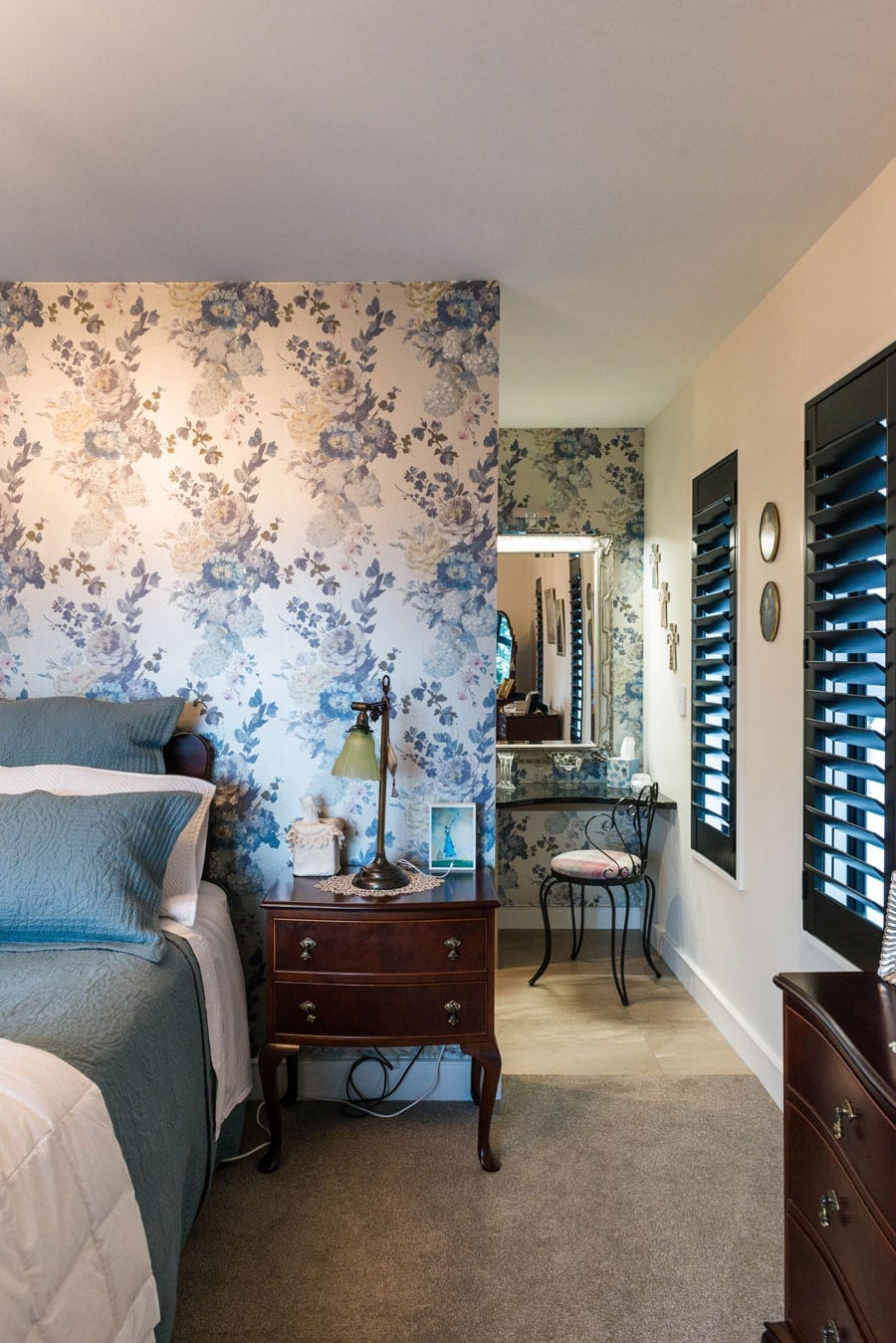 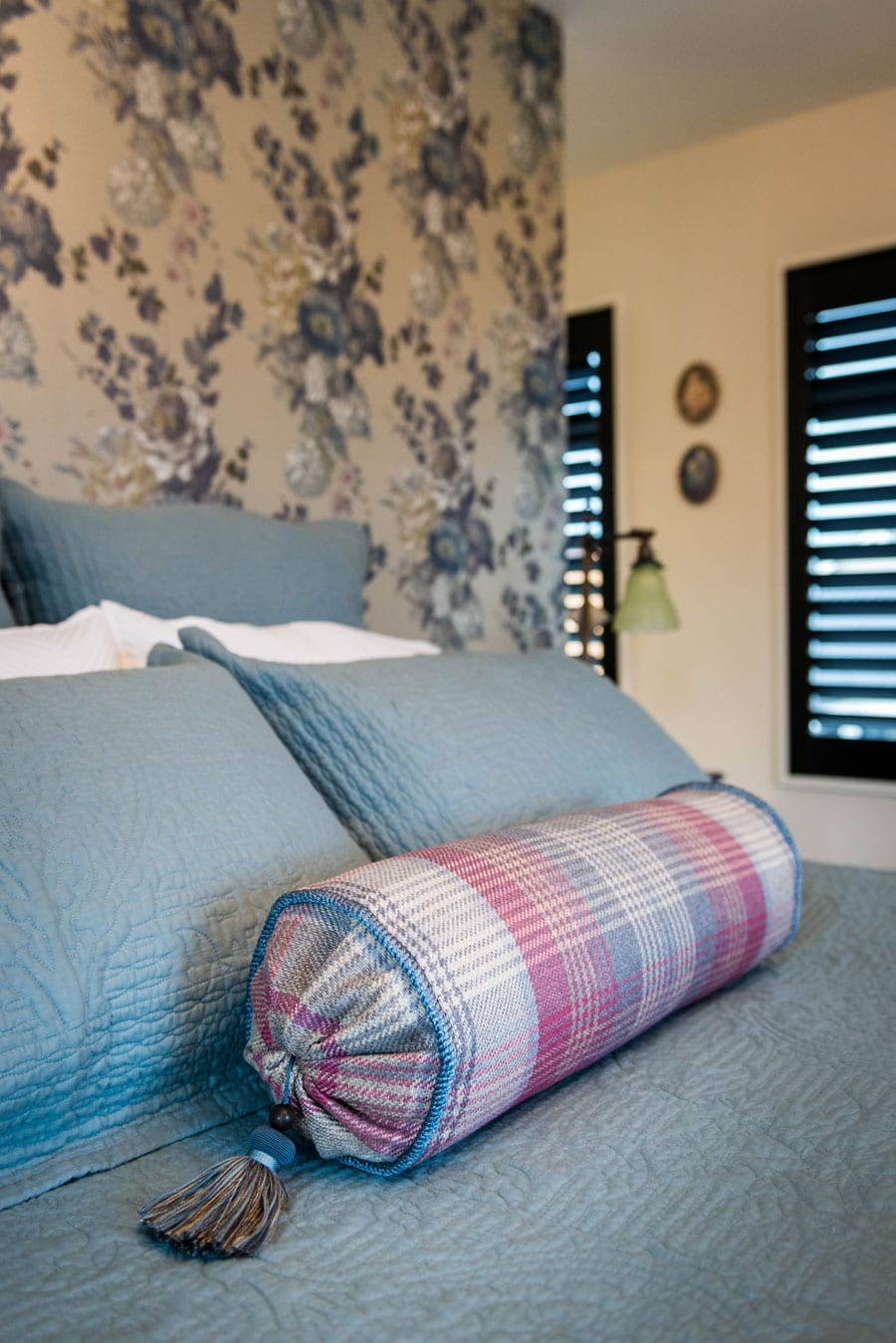 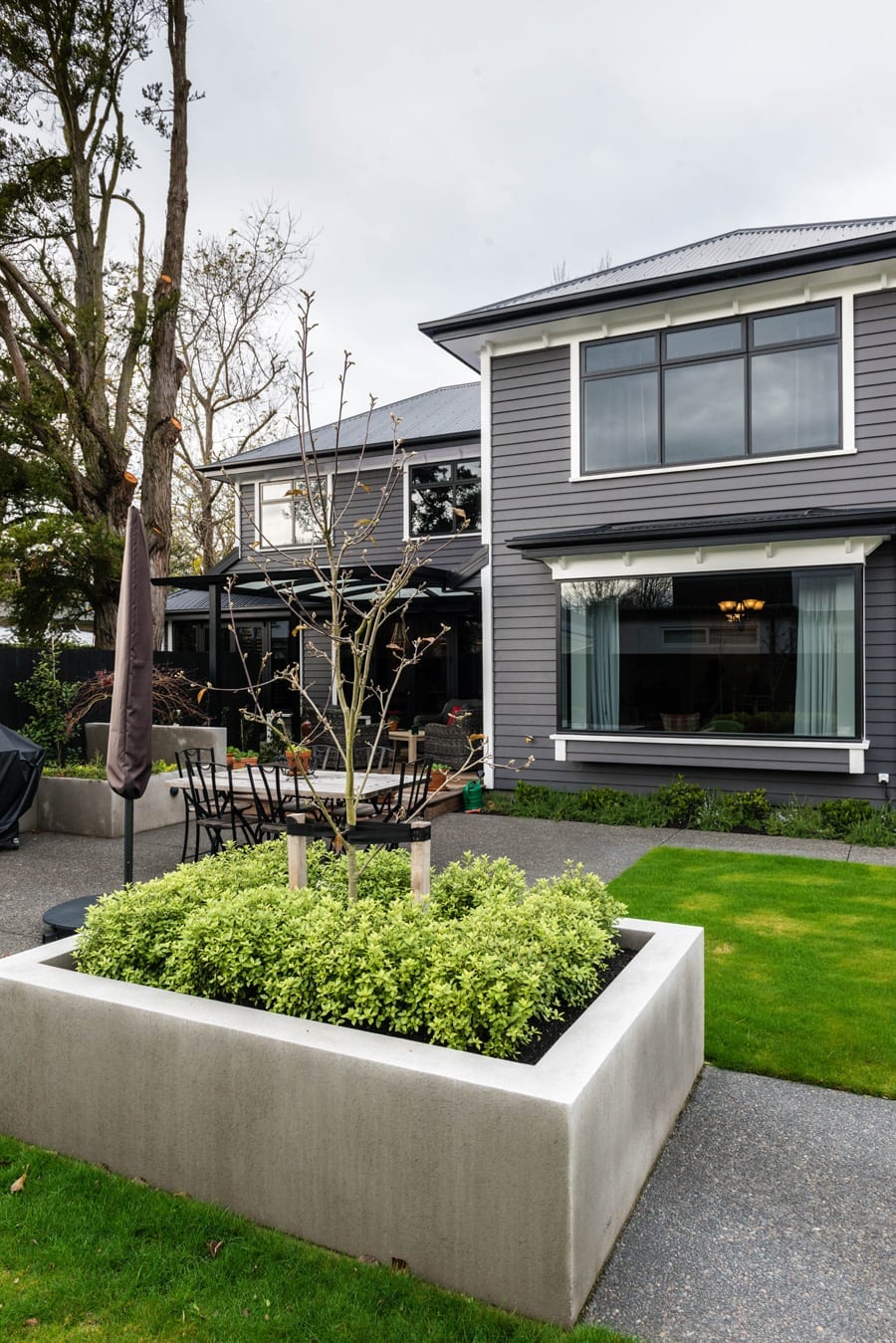 Need help to create your interior design dreams? At McKenzie & Willis we offer in home consultations with our highly experienced interior design team. We aim to make the process fun, rewarding and most importantly easy. We’ll come to your home, do a free measure & quote and work with you to develop the perfect furnishing scheme. If you’re in the early stages of building we can even work off plans.

For everything interiors visit our consultants in store or book an in-home consultation online here. 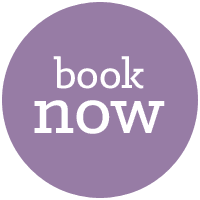 Thank you for joining our database.