The Registered Master Builders House of the Year Awards is an annual competition celebrating building excellence in New Zealand. We have supported the event for many years now, sponsoring the McKenzie & Willis Interior Design award in the Canterbury and Southern events. This prestigious Lifestyle Award is awarded for excellence in workmanship, creativity and innovation and this year we congratulate the well-deserved winners Summerhill Construction (Southern) and Stealth Construction (Canterbury). 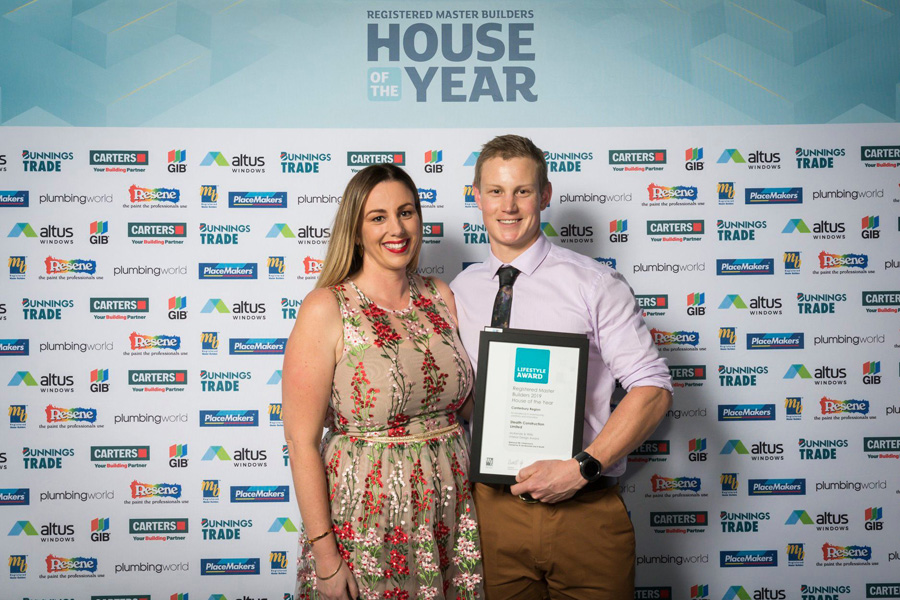 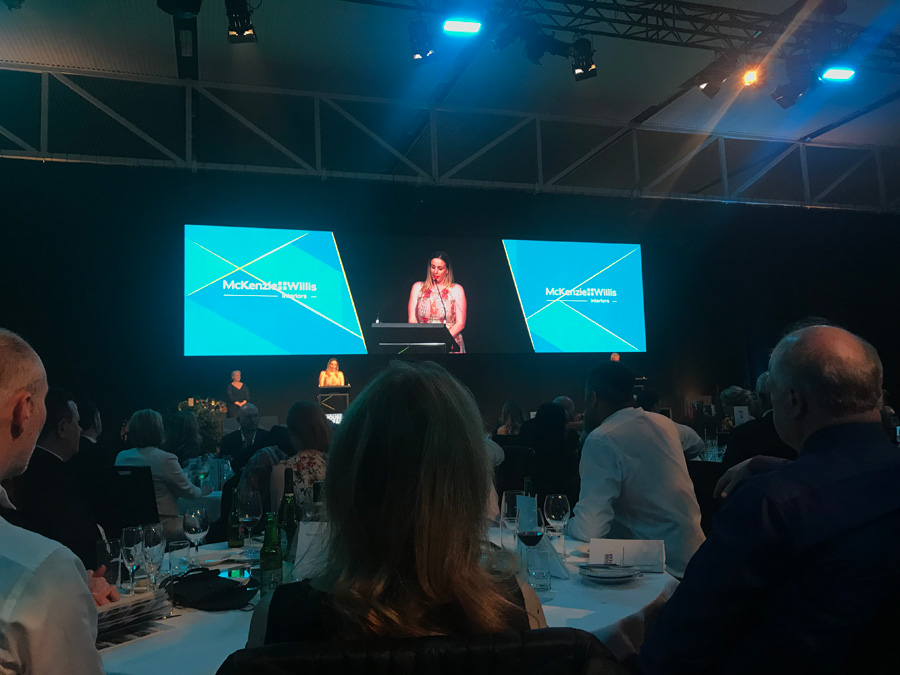 There’s something rather special about Stealth Construction entry into this year’s awards. Nestled into the hill, this home features expansive views over Redcliffs and the ocean beyond, clean contemporary lines and a light airy interior. 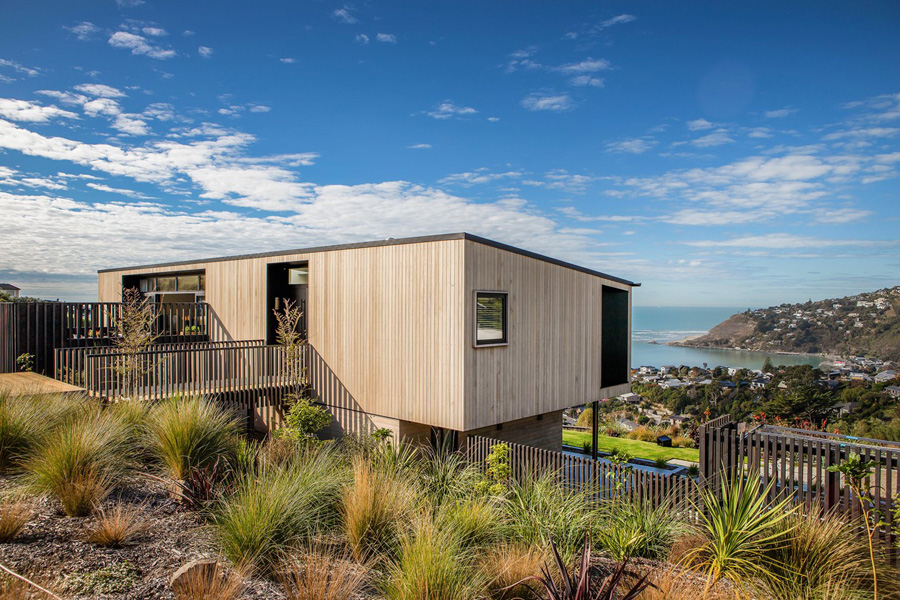 Built around the views, it’s no surprise that this home required extensive glazing. The largest window is 7.6 by 3.0m and was delivered to the site in one piece. Not one to shy from a challenge, Curtis (Director for Stealth Construction) tells us that the team lifted it on to the roof and lowered it from a scaffold into place due to the location of structural members.

Perhaps the most impressive part of this build is the way Stealth Construction overcame challenges just like this throughout the process. “We thrive on the technicalities that come with a build of this nature” says Curtis. The suspended polished concrete first floor with detailed cantilevers and numerous recesses and overhangs is another great example of their ability to take on difficult feats. A meticulous attention to detail was imperative and the Stealth Construction team spent many hours making sure the measurements were correct and the boxing was strong and sufficient. “It was a nervous day watching all that weight being poured that far off the ground. Also being a salt and pepper finish, any high points in the slab would have resulted in uneven grinding so heights were checked and re checked throughout the pour to allow for any potential settling in the Stahlton ribs which supports the bulk of the slab” says Curtis. 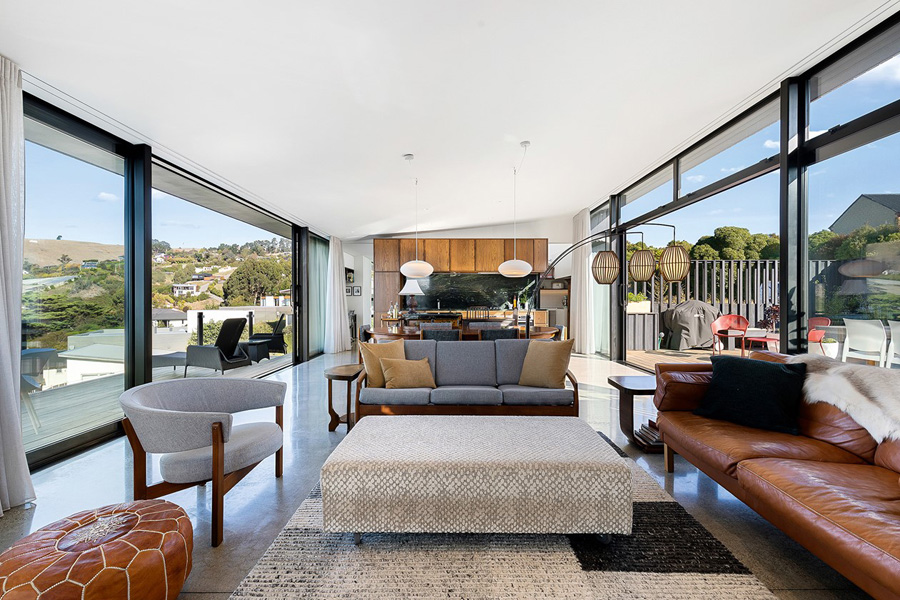 Particular attention was also given to the many negative details throughout the house as any discrepancies during the build would have shown as uneven negative gap. “You constantly need to be one step ahead and a good understanding of your plans is extremely important” says Curtis.

Outside, the home perfectly complements its surroundings, blending with the natural landscape through colour and material choice. The combination of both vertical and horizontal shiplap cedar was the biggest factor in achieving this cohesive look. “The cedar was coated in Drydens Oil in Dune, which provides a beautiful light appearance” says Curtis. For subtle yet effective contrast, James Hardie Villaboard linings were chosen for the window recesses along with Colorsteel sill flashings in matt black.

Once more, Stealth Construction attention to detail is evident here in the cladding. Curtis tells us that care was needed around the cantilevered sections to make sure cladding lines married in to those of the cedar soffit. “This gives the appearance of the cedar enveloping the house through one clean line.” 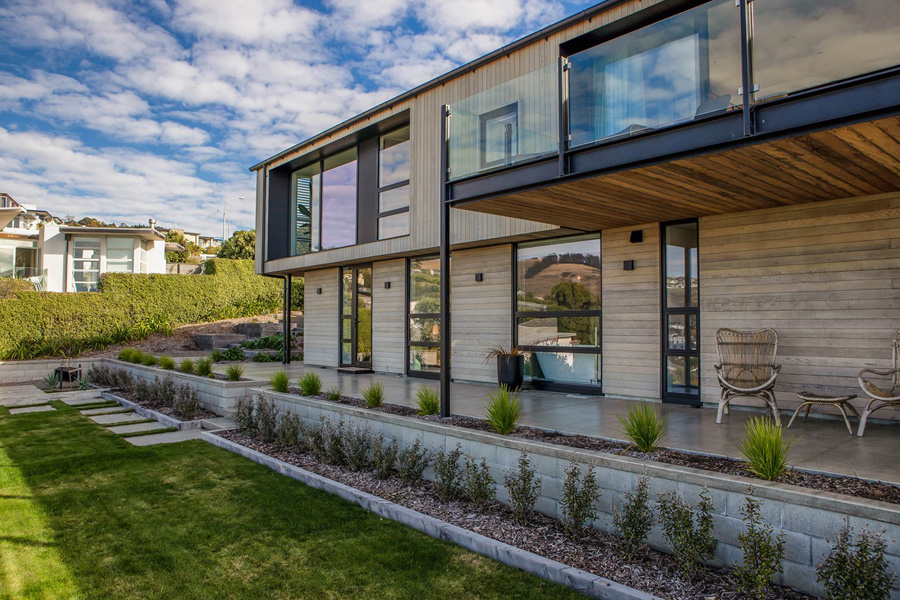 Curtis credits the success of the project to his team as well as the relationship he has with his suppliers and sub trades. “We use these guys simply because we know they are some of the best in the business, they really know their stuff and go the extra mile for our clients and are always a pleasure to work alongside with” explains Curtis. The “amazing clients” and the design team from Colab Architecture, who they worked together with through the complexities of the build, also deserve a special mention.

Stealth Construction was awarded the McKenzie & Willis Interior Design Award as well as a Gold Reserve for the New Home $1 Million – $1.5 Million category given to up to 100 homes each year. They will now proceed to the National House of the Year Awards.

Southern House of the Year 2019
Category: New Home over $2 million 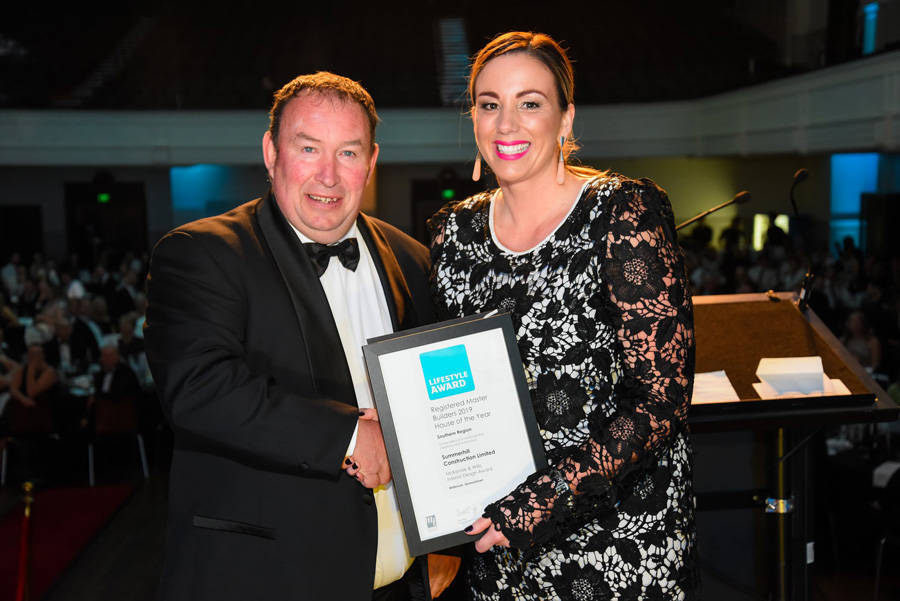 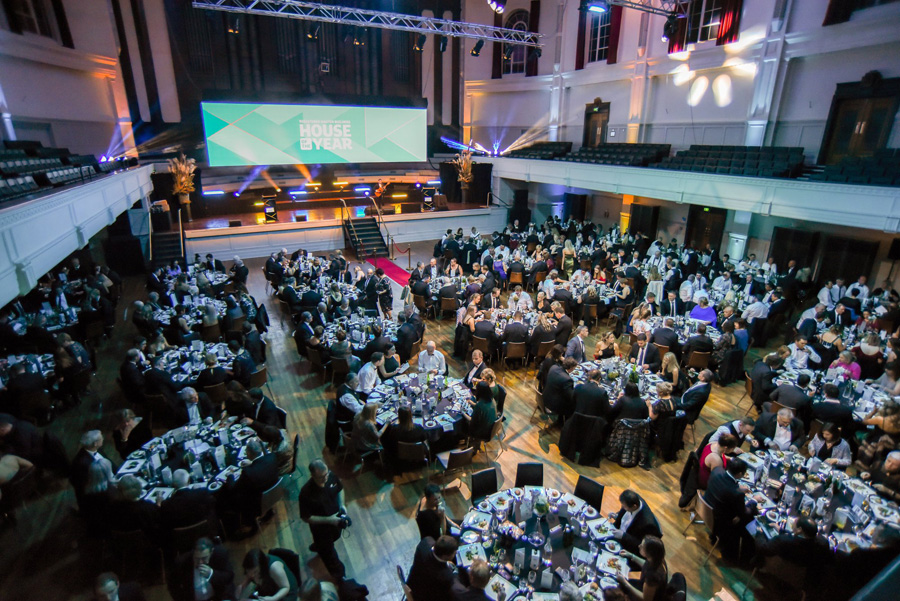 Set amongst the peaks of Central Otago, this luxury new build includes four bedrooms, four bathrooms and an incredible 900sqm footprint. It finds the perfect balance between modern and traditional, sourcing materials from all over the globe. 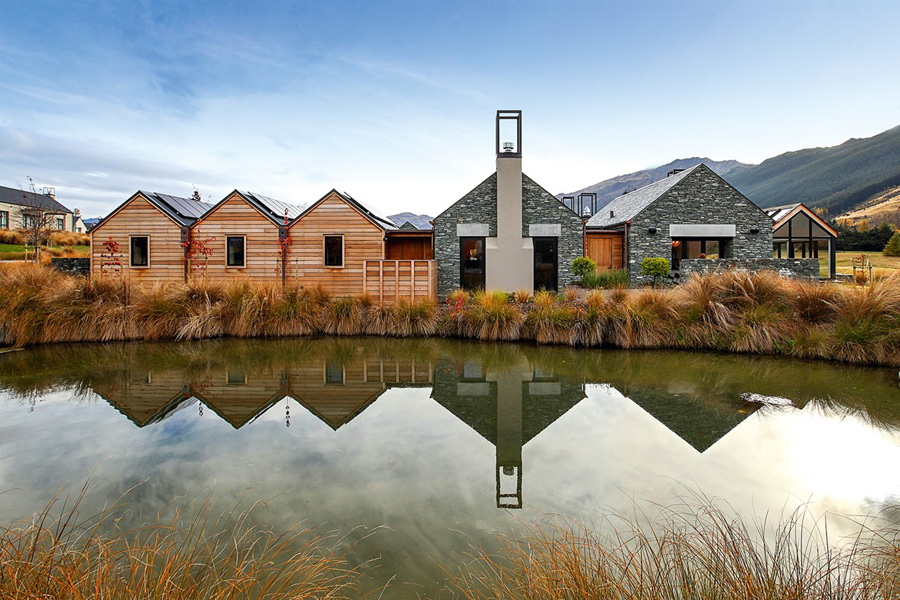 A project of this size required an astute project manager. “Due to the complexity and size of a build this big, the key to success was organisation” says Peter (Director for Summerhill Construction). The house was built in five stages with the basement and each wing of the house having its own stage of the build. “We initially had to start with the underground basement, which features a cinema & wine cellar. Once one stage was near completion, the next stage would begin; this meant we had to be ordering materials and subcontractors 6-8 weeks in advance.” On many days throughout the project, there would be up to 30 different contactors on site. In order to keep things on track and to minimise any errors, Peter made a rule to walk around the entire building at least once a week. This allowed him “to step back and view the building as a whole rather than focus on each stage or wing.” 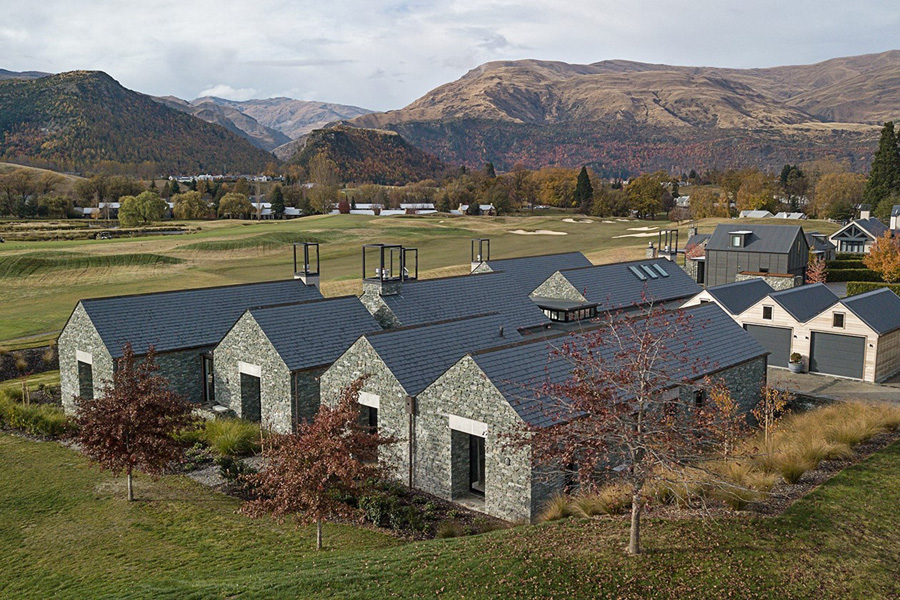 Every day brought new challenges. One of the most memorable for Peter was at the beginning of the project. “We were in the process of completing the block work and waterproofing for the basement when the pump failed and flooded it.” Not afraid to muck in, the only solution was for their foreman, Ben, to jump in and plug the plug back in.

Through careful planning, the team overcame the trials of not just one, but two biting Central Otago winters. “We had to plan carefully when to complete certain parts of the project, for example any concrete pouring had to be strategically planned with the weather forecast for it to set correctly” says Peter.

The home is fully automated with state of the art technology. Each wing of the house has its own iPad which is used to control the blinds, lighting, heating & air conditioning. The cinema area also has its own automation to control the LED lights on the ceiling and the projector. 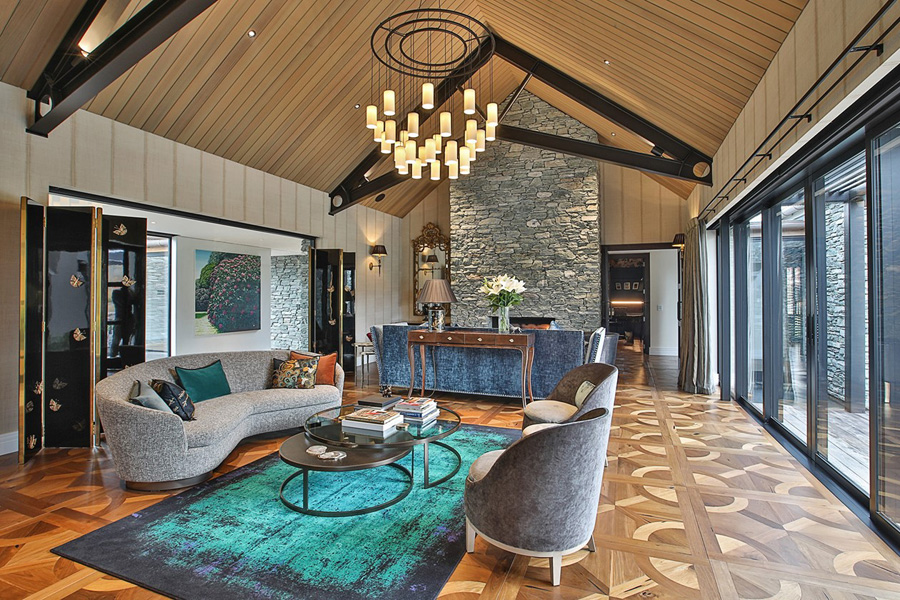 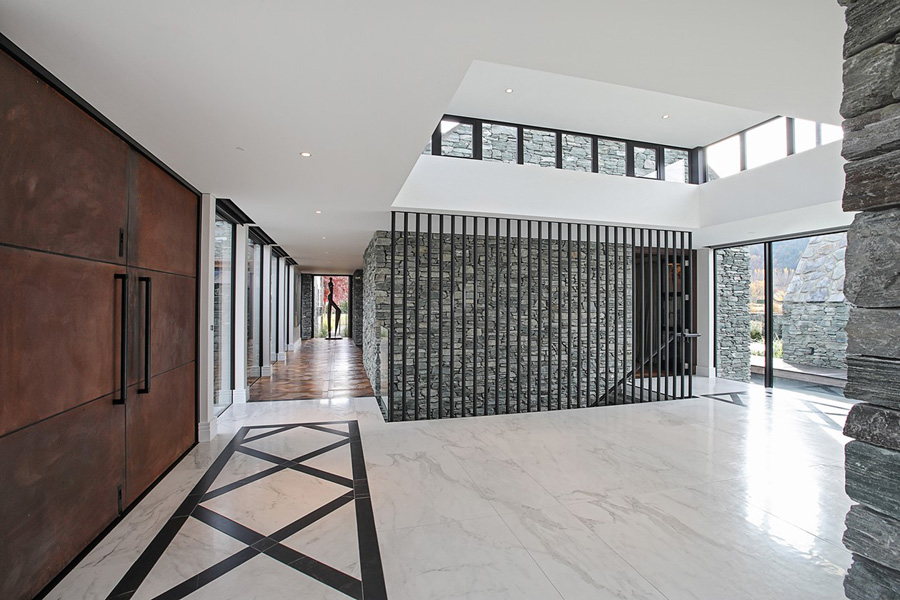 Peter tells us that the project featured a variety of materials which were sourced internationally. The roof is a tiled slate roof from Wales and pairs nicely with the copper spouting. Honest materials such as schist from a local quarry & cedar from Canada, allow it to blend with the natural landscape. Inside no expense was spared, the interior boasts timber flooring from San Francisco and bathroom tiles from Italy. With such exclusive materials, Peter’s thoroughness and care was paramount, “we estimated the orders to be plan + 10%; this meant that there was a very limited room for error with these specialised materials, which added to the difficulty of the project.”

Not only did Summerhill Construction win the McKenzie & Willis Interior Design Award but they were also awarded the Regional Category award for New Home over $2 million, for which they will proceed to the National Awards.

The team here at McKenzie & Willis were very impressed with the high calibre of entries and offer huge congratulations to all the winners who took home awards from the evenings. We wish both Stealth Construction and Summerhill Construction the very best of luck at the National House of the Year Awards. To see the full list of winners visit the Registered Masterbuilders House of the Year website.